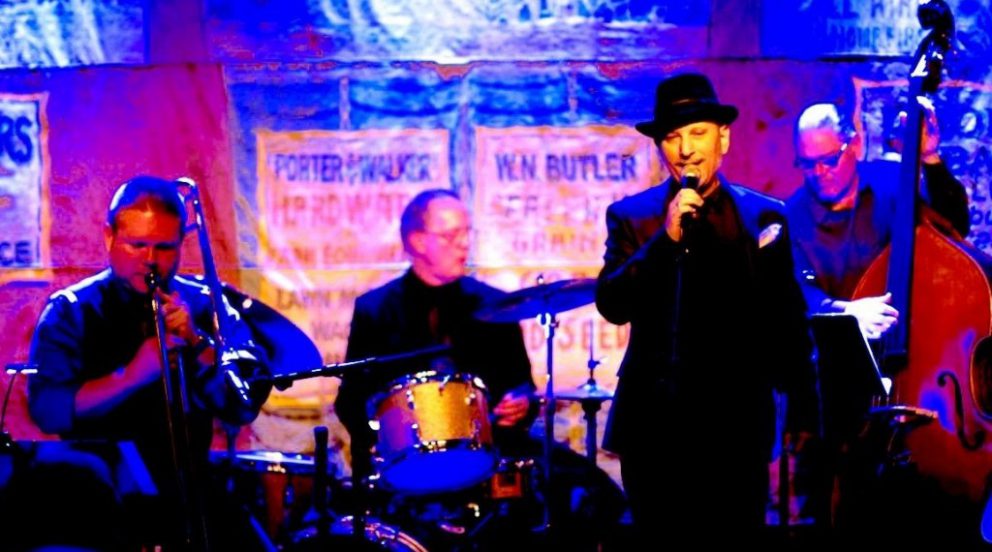 We believe in supporting live music. We believe in putting money in the tip jar, buying an artist’s new release or tickets to a show. We believe in making it live and local, because we believe music is Memphis!

How lucky are we to live in a city where live music plays virtually every night! Today we’re shining a #4Music spotlight on singer/songwriter Mak “Makky” Kaylor and The Swanky South Players who have an upcoming show at Lafayette’s next Sunday.

As a proud Memphian, Makky began his career playing at local music festivals and venues across the mid-south in his early teens. Makky also started a successful session singing career at age 18 as the commercial jingle voice of Memphis staples such as Channel 13 News, Mid-South Fair and more. He has since become an A-list session singer on famed Music Row in Nashville.

The Tennessee Department of Tourism described Makky as “Beale Street brewed. Music Row crafted. The Southland’s smooth, soulful crooner Makky Kaylor tastefully captures the essence of Faulkner and Twain with his original and repurposed vintage jazz infused with a distinctive southern flavor… as refreshing as mint juleps on Derby day and as soulful as magnolias in the moonlight! Bravo!”

Earlier this week, We asked Makky some questions to get an inside look into his love for Memphis and music:

As a proud Memphian, Makky began his career playing at local music festivals and venues across the mid-south in his early teens.

It’s an original blend of vintage country-soul and vintage jazz. It’s soulful, uptown southern music with what I hope is a timeless feel. My influences include the Rays – Charles and Price and Benson – as well as classic jazz from the 20s through the 40s and it’s distinctly southern. I just write ’em and croon ’em and I’m blessed to have a band of amazing, legendary players. I simply call it “The Swanky South.” My music has long been influenced by the classic Hall of Fame Nashville songwriters – with whom I’ve had the honor of writing or singing demos for – Hank Cochran, Willie Nelson’s early work (Willie and Hank Cochran were the first guys to publish my songs in Nashville), Dickey Lee (who urged me to move to Nashville in 1989), Harlan Howard (sang demos for him) and others. I’ve always naturally incorporated the Memphis soul music I grew up listening to into the music I write and perform as well so I was labeled a country-soul artist for a long time in Nashville with my various recording deals and singing lots of demos for legendary country writers because it’s just in my musical DNA, I suppose. My last album was uptown Nashville classics and had stories by country legends like Eddy Arnold (an audio note he’d sent me because he was a nice man and liked my work), Marty Robbins’ son Ronny and other stories about some of the classic country artists who first took country to the city listeners and gave it worldwide appeal. So, uptown classic country and classic Memphis soul have always been a part of my work. Listening back to a lot of my songs, classic jazz has also been a key ingredient and still is. These days, you’ll hear even more of a classic jazz flavor with horn players that makes for a soulful, uptown celebration of the southern experience. Someone wrote that now we’ve ramped up the southern swank and it’s sort of a ‘southern martini’ and I guess they’re right. Ha!

Well, there’s a sentimental feeling I have about Memphis because it’s where I was raised; where my family lived; where I married my wife LeAnn of 31 years now; where I developed long held friendships; and where I began my music career playing venues and singing in the studios.

Memphis has always inspired me as a writer and music creator. There’s a magic sauce in the music in Memphis. I’m eager to taste more of it again and contribute to it with my own ‘swanky southern’ ingredients. I’m looking forward to reconnecting with my roots, with family, with old friends and I’m making new ones. My plan is to make more music – writing, performing, recording- back home in Memphis. I’m connecting with folks specifically for that now.

Anybody that knows me knows that I have a deep appreciation for the rich heritage of Memphis and for this great music room. It’s an honor to play the same room that propelled so many great artists. I hope to feel that vibe and, perhaps, contribute to it to some degree.

After lots of years as a session singer, I wrote a book called “Confessions Of A Session Singer” (Hal Leonard Publishing available on Amazon.com). It was on required reading lists at some of the Universities with music business programs. (During that time I was also asked to be an adjunct career advisor/music biz lecturer at a music business and audio production school called SAE Institute located on Music Row). I told my students regularly and wrote in my book that the key to getting in and maintaining a career in the music industry is… Be about building relationships. Don’t just be about getting the next deal. Work on your craft and be authentic…. But long term, it’s about relationships.