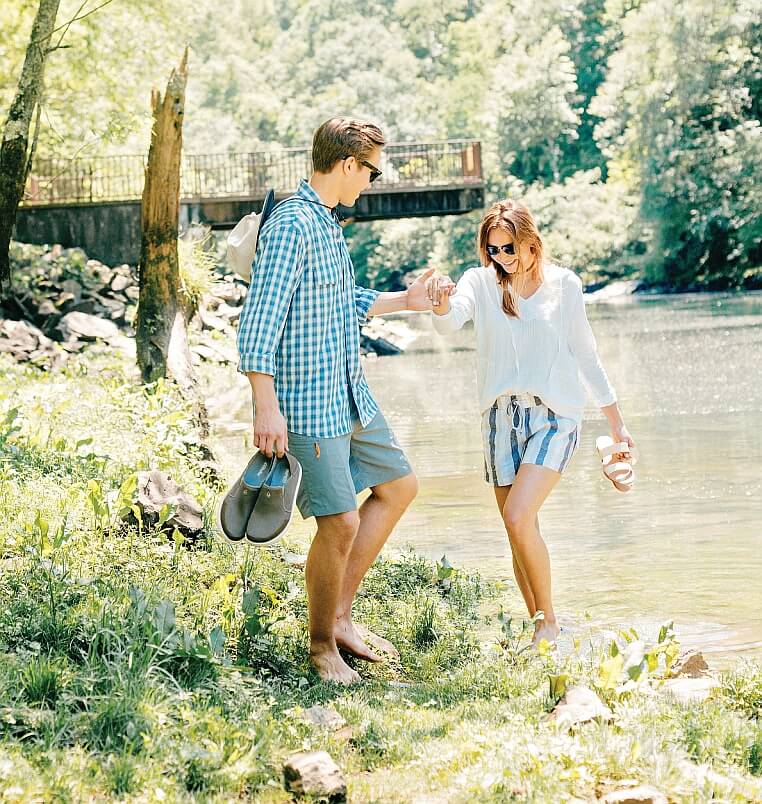 ven if they are located two or three hours away, a few places are almost considered to be suburbs of Memphis, because so many locals pack up and head out on weekends to idyllic spots within easy driving distance. The hamlet of Heber Springs, Arkansas, is one such “suburb.” With Greers Ferry Lake and the Little Red River, it is a little slice of heaven tucked into the foothills of the Ozark Mountains. The 4Memphis team took a fashion-shoot-road-trip (see pages 28-32), and found a charming town, beautiful scenery, and got some trout fishing tips from a world-renowned angler. 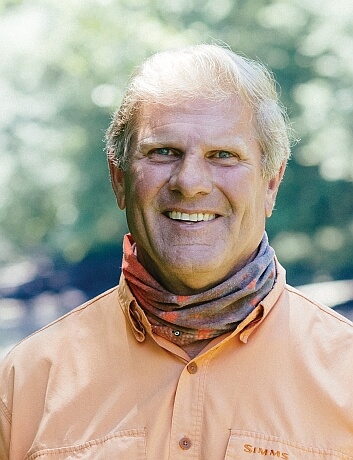 Driving across Greers Ferry Dam borders on dangerous because of the temptation to look at the sweeping views of Greers Ferry Lake or the 200 foot drop to the Little Red River. Safely across the dam, the John F. Kennedy Overlook gives a panoramic view of both. The 35th President himself was on-hand in 1963 to dedicate the dam, in his last major public appearance just a few weeks before his fateful trip to Dallas.

The crystal clear water in the 40,000 acre Greers Ferry Lake is a huge magnet for watersports, picturesque camping, hiking, and fishing. The lake was created when Greers Ferry Dam was built to provide electricity and flood control to the area. When water is released through the Dam, that is what creates the Little Red River. The water released through the dam at the bottom of the lake is cold, and trout thrive in cold water. The US Fish and Wildlife Service’s Greers Ferry National Hatchery began stocking the Little Red with Rainbows, Brooks, and Browns (now reproducing naturally), and Southern anglers embraced the newest challenge of fishing for trout.

Fly fishing is a sport that requires practice and patience, and having a guide is key to learning. Chuck Farneth is one of the best fly fishermen in the world, and since 2004 he has made his home in Heber Springs. He not only shares his fishing knowledge with his guide services, but he also shares his faith through fishing and the beauty of North Central Arkansas. As Chuck and his wife, Sherry, made plans in 1992 to move from Pittsburg to Little Rock to join the staff of the Family Life organization, he thought his days of trout fishing were behind him because of typically warm-water temperatures in southern states. But only a week or so after he accepted a position with Family Life, the world-record largest Brown trout was caught in the Little Red River. So when the Farneths moved to Arkansas, Chuck brought along his fly fishing gear and continued in the sport he had loved since he was a child.

“My wife said to me, ‘Ok, you’ve got the gold medal now. Are you going to use it for your glory or for God’s?’ That changed everything,”..Chuck Farneth

In 2000, Chuck was selected as one of 12 fishermen worldwide to compete in the ESPN Great Outdoor Games in Lake Placid, NY, at the Olympic Center, site of 1980 Olympic games. “It’s like the Olympics for outdoors,” he said. In his first year, he won a Bronze Medal. But it was in 2001, when again he competed and came away with a Gold Medal that ministry became the focus of combining his faith with fly fishing. “My wife said to me, ‘Ok, you’ve got the gold medal now. Are you going to use it for your glory or for God’s?’ That changed everything,” He founded Outdoor Legacy, and began leading weekend outdoor retreats for fathers and sons. “Through the activities of fly fishing, rock climbing on Sugerloaf, and other activities, we create visuals for the Biblical manhood,” Chuck explains. His definition of manhood that is taught and emphasized throughout the weekend is to: 1) reject passivity, 2) accept responsibility, 3) lead courageously, and 4) expect God’s greater rewards. The time outdoors bonds the fathers and sons as they create memories learning to be responsible, productive men.

Chuck is the only competitor to have participated in all five of the Great Outdoor Games from 2000-2005. In 2014, he represented America in the World Masters Fly Fishing Championships in Chile. The four-man Team USA placed 4th, the highest showing in 30 years. For Chuck personally, he finished 7th in overall points in the world in that competition.

What does Chuck hope anglers and visitors take away from their time in the beautiful Heber Springs area? “A satisfaction that the river can provide for you. You’re going to be productive, hopefully catch a few fish. If people can come to the river, get away from their everyday activities, relax a little bit and enjoy the water – it’s a natural air conditioner in the hot summer. The river provides a satisfaction and relaxation. Catching fish is a bonus.” 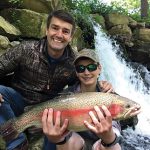 For more information about Heber Springs, visit heber-springs.com and arkansas.com. To contact Chuck for a weekend retreat or trout guide service, contact him at 501-944-1600 or slfarneth@aol.com.