One of the many amazing features of the new Crosstown Concourse, the Crosstown Arts Residency Program offers Memphis based artists, musicians, dancers, and writers the opportunity to cultivate "creative exchange” throughout the community. The program accepts sixteen local artists with unique styles to participate in a three month residency with access to meals six days a week and a private studio. In addition, the accepted artists participate in public engagement activities such as the weekly artist talks in an effort to share their work with the community.

In a short forty-five minutes, a few of the artists speak to a small group of people about their passions, how they have lead them to Crosstown, and where the Crosstown Residency is leading them. This March I had the pleasure of listening to three amazing artists, Eric Clausen, Yancy Villa-Calvo, and Robby Grant, as they told their stories of how their art came to be.
In 2016, Eric Clausen began his two year bike trip across the country. On days when he wasn’t biking the approximate 50-110 miles to keep up with his schedule, Eric documented the alternate realities of the people and places he encountered in small sketches GIFs as a part of an “anthology of sketches”. “It’s a big adventure and I sleep in ditches. It’s great,” Clausen said of his cross country bike ride before he began to experience knee problems and returned home. 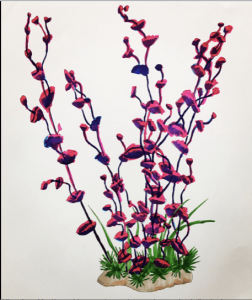 Now back in Memphis, Eric works with Crosstown and other local businesses to create flyer illustrations and hand paint custom signs. Additionally, Clausen is working on a collection of fish tank plant drawings and paintings. “There’s something beautiful about the fantasy of fish tank plants,” said Clausen when asked “Why fish plants?” Because, they are what we have made a reality for goldfish, yet the fish are unaware that they are not real. Making you wonder if we are really aware of what our reality is.

Yancy Villa-Calvo began her presentation with a slide plastered with four words—Mexican, immigrant, woman, artist. Although she acknowledged that several of those words are not very popular at the moment, those are the words that she is proud to describe herself with. Born in Mexico, Villa-Calvo moved to Memphis to attend Christian Brothers University on scholarship and signed up for an acrylic painting class on a whim her senior year. Since then, she has fallen in love with painting and now uses her art to positively highlight the diversity of Memphis through her many projects at Crosstown, including Mexicanísmo: a multimedia fusion exhibit, Barrier Free, and GEMS (Go Explore Memphis Soul). Villa-Calvo says that “[her] life as an artist [is] about diversity,” and she uses her projects to invoke empathy for the struggles of immigration and to show people that what makes them and their community different is what makes them beautiful.

MEXICANISIMO from Crosstown Arts on Vimeo.

Every since being introduced to the instrument by a high school friend, Robby Grant has been setting new boundaries for the Mellotron. The mellotron is an instrument similar to a keyboard, except each key is programmed with a unique sound; for example, Grant was able to play a short clip of recorded poetry as his son’s guitar riff sounded in the background all in the press of two keys. In the words of Grant, the Mellotron is an “orchestra at your finger tips.” After playing in several Mellotron bands, Grant and his friend found the Crosstown Residency Program and received at grant that allowed them to create the world’s first Mellotron duet album “Duets for Mellotron,” which is available on Spotify. After a sold out Duets for Mellotron show in January of 2017, Grant will be returning to Crosstown with his Mellotron as a part of a multi-day festival, Mellotron Variations, free to the public April 18, 21-22.

DUETS FOR MELLOTRON from Crosstown Arts on Vimeo.

With residents ranging from experts of the Mellotron to activist painters, the Crosstown Artist Talks allow for all of the amazing artists of Memphis to share their passions throughout the community. Each artist is just as unique as the art they create, yet through the Crosstown Artist Residency program they are able to collaborate through their shared passion for the arts and introduce our community to the fantastically diverse art that Memphis has to offer.