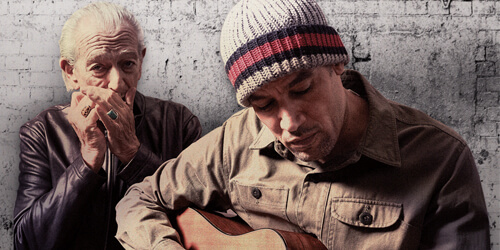 There’s a moment in the title song of the new Ben Harper and Charlie Musselwhite album called No Mercy In This Land. A mere few seconds that powerfully capture the friendship and unique collaboration between the two storied musicians. The music, a primal and intimate blues, stops with the exception of a sustained organ note. Musselwhite, survivor and harmonica virtuoso, cohort of Muddy Waters, Howlin’ Wolf, and Little Walter in the early sixties, life nearly ended by alcohol and other maladies, leans in and delivers the lines, “Father left us down here all alone, my poor mother is under a stone. With an aching heart and trembling hands, is there no mercy in this land.” And with those words, that weary voice, you can hear it all — the highs and lows, the adventures, the sadness and all the loss.

“I never asked Ben about the lyrics,” Charlie reflects, “but my mom was a single mom and I was an only child. And the line, ‘my poor mother is under a stone,’ well, she was murdered. So she’s gone and she’s under a stone. This is personal to me. It’s the essence of blues. People talk about the blues from an academic standpoint, but to me it’s about feeling. And that feeling there is pure. That song moves me every time.”

Ben says the two never discussed the meaning of the lyrics. “It’s fragile territory what he went through with his mom,” Ben says. “I was scared to bring that to him, because I know what happened. And that line, it’s me being affected by my friend and what happened to him. With Charlie, some things I pick up on are spoken and some are unspoken, but we know a lot about each other. But the deepest part of our friendship doesn’t need to be said. ‘No Mercy In This Land,’ that song is for Charlie. It’s gotta hurt sometimes.”

No Mercy In This Land is a blues record. Charlie Musselwhite and Ben Harper were introduced to one another by John Lee Hooker. The legendary musician thought the two men should play together, so he brought them into the studio to record a song called simply “Burnin’ Hell.” The two remained friends and their paths periodically crossed out there on the road. But it wasn’t until 2013 that the two met up in a studio to record what would be their Grammy-winning album Get Up!. And as good as that record was, it was just the beginning. They both agree that their friendship deepened in the many months of touring that followed. And it’s that bond, that closeness, that makes this new record something special.