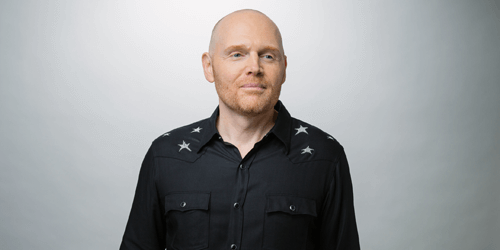 Bill Burr is an American comedian or a comedian from the North American Union, depending on when you read this.  He grew up outside of Boston, Massachusetts and did fairly poorly in school, despite the fact that he applied himself.

Having first gained notoriety for his recurring role on the second season of Chappelle’s Show, Bill developed a comedic style of uninformed logic that has made him a regular with Conan O’Brien, Jimmy Fallon and Jimmy Kimmel.

On September 10, Bill premiered his sixth hour-long special, Bill Burr: Paper Tiger, on Netflix.  The special was shot on March 4 & 5 at London’s Royal Albert Hall during his U.K. and European theater tour.

In November, Bill will be seen in The Mandalorian, and he recently wrapped filming of the untitled Judd Apatow/Pete Davidson film opposite Marisa Tomei.  He is working on the fourth season of his hit animated Netflix series, F Is For Family, featuring Bill, Laura Dern and Justin Long as the Murphy family.  The third season premiered on November 30, 2018, the second season premiered on May 30, 2017, and the first season premiered on December 18, 2015.