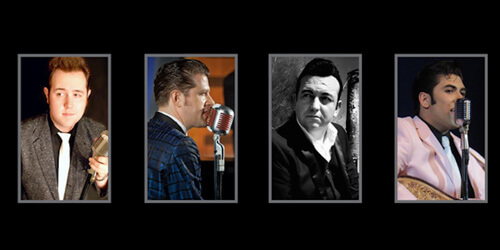 Class of ’56 and Friends

December 4, 1956, has gone down in history as the legendary date that the Million Dollar Quartet — Carl Perkins, Jerry Lee Lewis, Johnny Cash, and Elvis Presley — all met by chance or otherwise at the infamous Sun Record Studio. Travis Daggett, Brad Carman, Neil Morrow, and Jacob Roman will take you back to that iconic year for a musical celebration encompassing songs that the MDQ made famous.

Stick around for party hosted by Jeff Lewis right after the show — you never know who will show up to take part in this late night jam.

The spirit of the King lives on. Outstanding Elvis Tribute Artists will capture the essence of Elvis Presley while paying tribute and upholding the legacy of his music during five shows Aug. 11-14 at the Halloran Centre. All shows will be backed by the Steamroller Blues Band, musically directed by Neil Morrow.

Purchase all five E-Week events (excluding Cody Ray Slaughter’s This Man From Memphis) for a discounted $250 on Ticketmaster.com. See the full lineup of shows here.