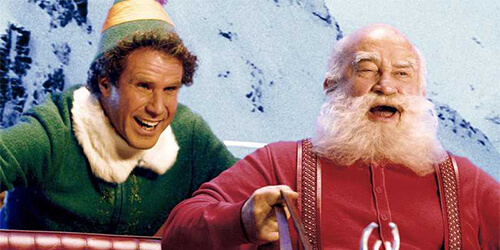 The Orpheum Theatre Group will once again join forces with the Memphis arts community in the third annual Mid-South Arts Against Hunger food drive benefiting the Mid-South Food Bank.

As part of the food drive, the Orpheum will welcome guests to a screening of Elf, with a special visit from Santa and pre-movie sing-along!

There are three easy ways to get your tickets to the movie:

• Bring a non-perishable food donation (three items per ticket is suggested) to the downtown box office Monday through Friday, 9 am to 5 pm, or on the night of the screening

• Purchase $5 cash-only admission at the downtown box office Monday through Friday, 9 am to 5 pm, or on the night of the screening
About the Movie

Buddy was a baby in an orphanage who stowed away in Santa’s sack and ended up at the North Pole. Later, as an adult human who happened to be raised by elves, Santa allows him to go to New York City to find his birth father, Walter Hobbs. Hobbs, on Santa’s naughty list for being a heartless jerk, had no idea that Buddy was even born. Buddy, meanwhile, experiences the delights of New York City (and human culture) as only an elf can. When Walter’s relationship with Buddy interferes with his job, he is forced to reevaluate his priorities.