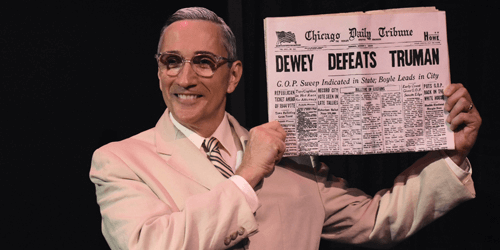 Give ‘Em Hell, Harry!, written by Samuel Gallu, is a faithful and often humorous portrayal of President Harry S. Truman’s life and presidency. It spans his childhood, his “political apprenticeship” as a judge in Jackson County, MO, his years in the US Senate and his momentous two terms as President.

Actor James Whitmore originated the role in 1975. Clifton Truman Daniel took up the mantle in October 2017, marking the first time in history a US President would be portrayed onstage by a direct descendant….in this case, his oldest grandson.