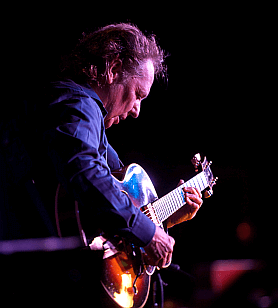 Grammy® Award-Winning guitarist Lee Ritenour received a rich cross section of exposure to jazz, rock and Brazilian music. From one of his first sessions at 16 with the Mamas and Papas to accompanying Lena Horne and Tony Bennett at 18, his forty year eclectic and storied career is highlighted by a Grammy® Award win for his 1986 collaboration with Dave Grusin, Harlequin; 17 Grammy nominations; numerous #1 spots in guitar polls and the prestigious “Alumnus of the Year” award from USC. He has recorded over 40 albums, with 35 chart songs, notably the Top 15 hit “Is It You,” which has become a contemporary jazz radio classic. In the 90s, Ritenour was a founding member of Fourplay, the most successful band in contemporary jazz, with keyboardist Bob James, bassist Nathan East and drummer Harvey Mason. The first Fourplay album in 1991 spent an unprecedented 33 weeks at No. 1 on Billboard’s contemporary jazz chart. Adding to this legacy is his latest CD Smoke ‘n’ Mirrors; the recently completed Grammy nominated recording Amparo, (a follow-up with Dave Grusin to their highly-successful 2001 Grammy Award nominated contemporary classical crossover CD) and producer of Gordon Goodwin’s Big Phat Band’s latest CD Act Your Age (which is nominated for 3 Grammys.