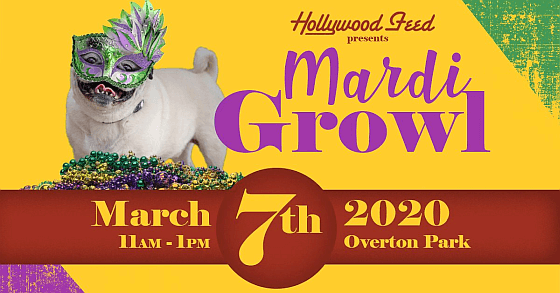 Hollywood Feed and Overton Park Conservancy invite you and your dogs to Mardi Growl on the Greensward! Local Gastropub will be on hand with a crawfish boil, and the winner of the dog costume contest will receive a $100 gift certificate to The Second Line! Dress your dogs in their most festive gear and compete for prize packs from Hollywood Feed. Celebrity judges Lucy Furr, David Scott of Dave’s Bagels, and journalist Markova Reed Anderson will pick their favorites. Afterwards, stick around for a pup parade in the Old Forest.

ABOUT HOLLYWOOD FEED: Hollywood Feed serves pets, their owners, caretakers and communities in 100+ stores across 14 states. Consistently ranking atop consumer choice awards in the markets it serves, Hollywood Feed and its family of brands have most recently been named Best Pet Supply Stores by Dallas A-List, Best Pet Store by The Memphis Flyer, Best Self Atlanta Magazine’s Best Pet Store, Best Pet Food and Supplies in the Best of Denton County Awards, and Best New Business by Cary Living Magazine in North Carolina. Hollywood Feed proudly stands by its brand promise: If your pet doesn’t love it or if you don’t love it, we will gladly replace or refund it. Learn more about Hollywood Feed at hollywoodfeed.com and facebook.com/hwfeed.