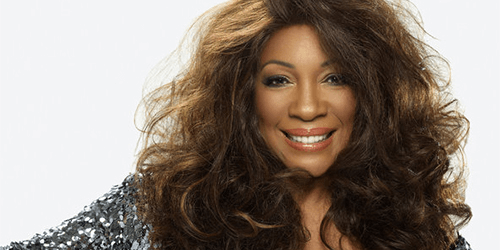 It was a vision of musical stardom as a Detroit teen that inspired Mary Wilson, along with Diana Ross and Florence Ballard, to found one of the most successful female singing groups in recording history — The Supremes. Since then, Wilson has written a best-selling autobiography, performed on stage and screen, lectured and toured the world, and continues to be looked up to as a singer who set the standard for females in the recording industry.

This past summer, Wilson performed a number of consecutive shows at Feinstein’s at the Regency, New York’s premiere supper club. In her “Mary Wilson: Up Close” show, she wowed audiences with an intimate selection of standards and easy-listening tunes that showcased her smoky voice and vocal prowess. Wilson closed the season at the prestigious nightclub, which The New York Post called “an invaluable New York institution.”

As an original Supreme, Wilson was a much sought-after interview regarding the award-winning film, DREAMGIRLS. After covering the red carpet premiere for Extra, she endeared herself to a whole new generation of Hollywood stars and fans alike, including Golden Globe winners Eddie Murphy and Jennifer Hudson, as well as Jamie Foxx, Beyonce, and Snoop Dogg! The success of DREAMGIRLS has also rekindled interest in Wilson’s best-selling autobiography, Dreamgirl: My Life as a Supreme.

In addition to her tireless performing and trips to the studio to record her new album, Wilson, along with The Vocal Group Hall of Fame and Friends Against Musical Exploitation, is lobbying state governments to pass a bill prohibiting bogus musical groups from cashing in on the names and likeness of such famous acts as The Supremes and Four Tops. Wilson and company have proposed an amendment to the Truth in Advertising Act (1968) that would prevent such groups from performing under such classic bands’ names unless they contained an original member or had specific licenses to do so. Wilson’s goal is to garner enough state support to lobby Congress to pass a federal law. “We have given America and the world happiness with our music; it’s time that we have a law that protects us and our legacy,” Wilson states.

Tireless in her contributions to charity and society at large, Wilson was recently named as a spokesperson for The Humpty Dumpty Institute’s initiative to raise public awareness about the worldwide scourge of landmines. As HDI’s Mine Action Spokesperson, Wilson traveled to Sri Lanka and then Laos this past fall, visiting schools impacted by unexploded ordinance left over from the Vietnam War. After helping to detonate 58 bombs and declaring safe zones, she held a charity concert in Colombo, Sri Lanka. In addition, Wilson addressed the annual conference of the US Department of Agriculture on Food Security. In early summer, she will travel to Vietnam and visit the mine action program.

In 2003 Wilson was named a US Cultural Ambassador by US Secretary of State Colin Powell as part of a “Culture Connect” program. The goal was to improve cross-cultural understanding internationally. As such, she undertook missions to Bangladesh, Pakistan, South Asia and South America on behalf of the US Department of State. Wilson was also recently awarded a Doctorate of Humane Letters from Paine College in Augusta, GA.

While growing up in Detroit’s Brewster Projects, her love for singing blossomed when she befriended Florence Ballard, Betty McGlown, and Diane Ross at age 13. Fueled by their mutual love of music and their ambition for stardom, the quartet formed a singing group, The Primettes, and became the sister group of The Primes, who saw two members go on to form The Temptations. Together they auditioned for the then-fledgling Motown label and were eventually signed. Betty and her replacement Barbara, both dropped out of the group, and the remaining trio of Mary, Flo, and Diane became known as The Supremes.

At first, success eluded the girls, who recorded several albums before getting their first hit. In fact, they were dubbed the “No-Hit Supremes” until Motown founder Berry Gordy put them in touch with his top writing and producing team, Holland-Dozier-Holland. Four decades and 40 albums later, what once started as a dream has exceeded beyond Wilson’s wildest imagination. With an unprecedented 12 number-one hits, including five in a row — “Where Did Our Love Go,” “Baby Love,” “Stop, In The Name Of Love,” and “Back in My Arms Again” — The Supremes set the precedent for supergroup success.

Wilson worked hard to keep the dream alive even after Florence and Diana left the group. In 1970, Berry Gordy brought in Jean Terrell to replace Ross, with Cindy Birdsong having replaced Florence Ballard. Together, they formed The New Supremes, racking up three top 10 hits — “Up The Ladder To The Roof”, “Stoned Love”, and “River Deep, Mountain High” (with the Four Tops).

To this day Wilson continues to tour under the moniker of Mary Wilson of The Original Supremes, and has performed for handfuls of celebrities and politicians all over the world, including the Clintons at The White House.

Throughout the late 70s and 80s, Mary hit the lecture circuit to tell her amazing story. She still lectures to this day, her “Dare To Dream” circuit including such organizations at American Cancer Society, St. Jude’s Children’s Hospital, UNICEF, and many more. Wilson eventually put her story to print, becoming a best-selling author with her autobiography, Dreamgirl: My Life As A Supreme. Dreamgirl went on to sell over 250,000 copies in hardback, becoming one of the most successful rock and roll autobiographies of all time. The overwhelming success of that first book prompted Wilson to pen its sequel, Supreme Faith: Someday We’ll Be Together. The third book by Mary Wilson combines the first two books with additional updated chapters.

Throughout her career, Mary Wilson has had the privilege and pleasure of performing all over the world. Royalty requested many of her performances with The Supremes, such as for Britain’s Queen Mother as well as for the King of Sweden. In 2000, Wilson had the prestigious honor of performing at the White House for the Millennium Celebration as well as two inaugural dinners held in President Bush’s honor. In 1988, The Supremes were inducted into the Rock & Roll Hall of Fame, receiving the prestigious Lifetime Achievement Award, which Wilson personally accepted. Seven years later, the Hall launched an exhibit of the “Supremes” gowns for the museum’s opening in Cleveland, Ohio called The Supremes Reflections: The Mary Wilson Supreme Legacy Collection. Wilson had been personally archiving the gowns for years. The Mary Wilson Supreme Legacy Collection, including the Butterfly dresses worn on their 1968 television special, is currently on tour in the United Kingdom.

With a successful solo career and new CD, an equally successful literary career and her tireless humanitarian efforts, Mary’s future couldn’t look brighter. She is living proof that dreams really do come true!