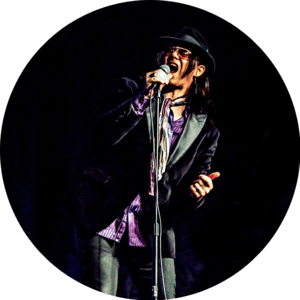 There’s a hallowed hall, deep within the recesses of the heart, where an amazing truth resides: The power in your life can only be experienced when broken open and shared with the people who come into it.

Back in 2005, Mike Farris cracked open the hallway door when, for the first time since the age of 15, he was clean and sober. Recording what would become the critically acclaimed Salvation in Lights (2007), a resurrected Mike eagerly anticipated the future. But with two ruptured discs, back surgery and the death of his beloved manager Rose McGathy all within a few weeks of the record’s release, a rolling fog settled in. And with it, denial.

By 2010, having released the award winning SHOUT! Live followed by an EP for Nashville flood relief efforts, Mike launched a Kickstarter campaign to fund his next record, an independent release. His fans generously funded the project.

Mike’s spirited, soul-gospel fusion had found an enthusiastic audience, but denial has a way of biting back. Compared to his former life, he thought he was fine, but truth be told, Mike had become addicted to pain medication. The new album would have to take a back seat to a gut-check, life-changing recovery. Mike went to rehab and finally began excavating the root causes of his addiction with the help of support groups at AA and NA. An isolator by nature, he struggled laying all his burdens on the table to complete strangers, but gained encouragement through the stories of others. Each honest step led to fertile, hopeful ground.

What eventually emerged from that fertile ground is Shine For All The People, the evolution of true sobriety, of finding a new identity as a servant, first as a man but also as an artist. “I’d been working on the record before my recovery, and then there was a pretty huge delay,” explains Mike, who signed with Compass Records. “I had to back up, take time to grab the ground, to re-acclimate, to learn how to live now, truly sober for the first time since I was a kid.”

This new normal included getting back to the process of creating new music, but there was a distinctive trajectory shift in Mike. “So many avenues of music flow through me, 100s of years of music, the music that I grew up with-from Blues, Rock, R&B and gospel-there had always been this pressure to try to force it into a box that would sell somehow. It’s crazy and overwhelming at times, the weight of trying to meet expectations and make a living, but this time, that all fell away. I know now that this gift only exists to encourage people in their struggles, and if there’s any power in it, it’s not from me.”

Released in September 2014, Shine For All The People pushes beyond Salvation in Lights in that it reveals hope not in any glory to come, but in the failures and suffering of the present. “My music has always been first and foremost for the downtrodden, the wayward…people who’ve had to go up the rough side of the mountain. Even when it’s upbeat and inspiring, there’s always been an element of pain, because truth be told, we’re all flawed. Not everybody knows it, but we all are.”

From the opening Cuban/St. Louis blues horns of “River Jordan,” originally written and performed by Blind Willie McTell, to the divine salvation of J.B. Lenoir’s “Jonah & the Whale,” to the determined stance of the Rev. C.J. Johnson’s “Something Keeps on Telling Me,” a chorus/mantra that Mike fleshed out into a song in the months after rehab…one listen, and it’s clear there’s something mystical in the waters here.

“When I first heard the Rev. C.J. Johnson’s version, I could feel the air in that church get still, no music, only the sound of feet on the floor and hands in the air,” Mike says. “I got such strength from it, I knew I wanted to add part of my story. With his words as the chorus, and with Brigitte DeMeyer helping me out, the song serves as a compass for anyone who has lost their way.”

Mary Gauthier’s soul-stirring “Mercy Now,” one of the first songs Mike chose for the record, is clearly foundational to the whole. “The song just mystically appeared before me a few months before my Dad was diagnosed with lung cancer,” he says. “Not only did it play a major role in just helping me deal with the year that followed, including his death, but brought comfort to my entire family.”

Like other choice cuts on Shine For All The People, the songs simply arrived at the appointed time, Mike says. “There was a time when I carried all the songwriting on my shoulders, but then the ego gets in the way of what it should be. These days, I don’t have to write everything. I just open the door and these songs show up…songs I need to hear in my struggle, songs I know people need to hear in theirs.”

Whether rearranging songs of centuries past or infusing new lyrical life to half-songs, it becomes clear that Mike’s vocal gift is simply the surface of a very deep well. Full-tilt originals include “Real Fine Day,” a poetic account of the birth of Christian Blue Sky Farris that features some killer Kenny Vaughn guitar hooks-“easily one of the top three days of my life, that day,” Mike says, and “Power of Love,” an unforgettable, high-energy soul groove and already an audience favorite.

Shine For All the People, the 2015 Grammy Award winner for Best Roots Gospel album, bears witness to the determination of putting one foot in front of the other and to the power of music to get you there. “I’ve discovered that falling is a divine thing,” Mike adds. “It’s part and parcel of being human. The important thing is to keep the faith and keep moving on and on. Daring to be courageous enough to share our deepest burdens with each other is the greatest gift we can give.”