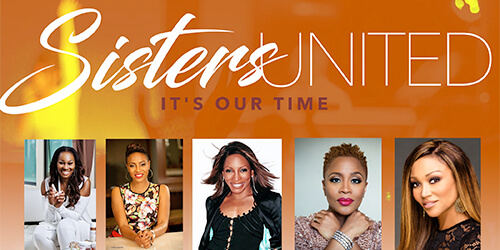 Sisters United: It’s Our Time is a movement of powerful women who will come together to uplift with music, comedy, motivation and empowerment. This one-of-a-kind evening of entertainment stars some of the biggest entertainers in the industry. In addition to singing, comedy, and motivation, “The Sisters” will also celebrate and recognize a local female entrepreneur by showcasing her and making a monetary contribution to her business.

Billboard Magazine Gospel Artist of the last decade Yolanda Adams is a five-time Grammy Award Winning Artist who believes that her music heals, encourages, and inspires others to trust more than themselves. She has triumphantly carried the torch for contemporary gospel and inspirational music via 13 glorious albums. Stunningly beautiful, exceptionally educated, filled with the spirit, and blessed with one of the most powerful voices in any genre of music, this Houston native and one-time school teacher has been a stately beacon of God’s light. She has earned numerous accolades for her shining efforts, including the first American Music Award for Contemporary Gospel Artist and four Gospel Music Association Dove Awards. Her pioneering blend of modern gospel with R&B and infused with a touch of jazz continues to inspire her fans and transform the musical landscape.

Legendary lyricist, DJ, voiceover talent, actress, entertainer, and icon, MC Lyte is still making the crowds move across the globe. MC Lyte first appeared on the scene in 1988 with her debut album Lyte As A Rock. At the tender age of 17 she began schooling other MCs in the art of rhyme, and since that time she has proven that greatness always prevails with a total of 10 albums (nine plus a Greatest Hits) to her credit. Lyte is the first rap artist ever to perform at New York’s historic Carnegie Hall and the first female rapper to ever receive a gold single.

Stephanie Mills is one of the most distinctive voices in contemporary music whose onstage energy and power inspire standing ovations wherever she performs. She is a legendary Grammy- and America Music Award-winning recording artist with five best-selling albums and ten Billboard #1 singles.

Some people have a calling that is undeniable, and Avery Sunshine is no exception. The former church pianist/musical director, who scored a #1 Billboard chart hit, brings people together through her riveting stage performances, candid and often humorous stage banter, and optimistic anthems about love and life. She does it so well that she has garnered praise from iconic musical figures like The Queen of Soul, Aretha Franklin.

Since arriving on the R&B music scene over 15 years ago via her sensual debut single “Love’s Taken Over,” Chante Moore has flourished into an accomplished female favorite. Billboard singles like “It’s Alright,” “This Time” and the top two smash “Chante’s Got a Man” helped put her name on a short list of artists known for consistency.

Gail Deadrick, a native of Los Angeles, began studying classical piano at the age of four. Gail became the Conductor for Natalie Cole in June 2000. She won a Grammy in 2008 as co-producer for Ms. Cole’s Still Unforgettable CD.

Yolanda Starks White has an impeccable reputation for making things happen. Her career achievements read like an executive’s “Who’s Who” and include working with some of the biggest names in entertainment. Starks White manages talent; executive produces nationally syndicated radio shows, major television programs, and special events; and provides marketing and branding strategies for clients. Starks White produced and toured No. 1 talk show host Wendy Williams’ highly popular comedy show, “The Sit Down Tour… Too Real For Stand Up.”