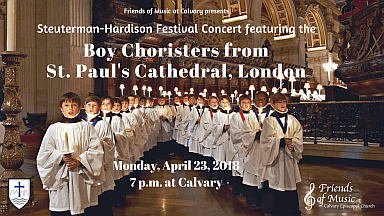 Friends of Music at Calvary present

A free concert in downtown Memphis

On Monday, April 23, at 7:00 p.m., Calvary Episcopal Church, 102 N. Second St., downtown Memphis, will host in concert the world-famous boy choristers of St. Paul’s Cathedral, London. The performance is free and open to the public.

The boy Choristers’ visit to Memphis is part of an eight-city commemorative tour of the United States to mark the 60th anniversary of the American Memorial Chapel at the Cathedral. Her Majesty Queen Elizabeth II opened the chapel, created by Eisenhower and Churchill as a tribute to American servicemen who gave their lives in World War II, in 1958.

Andrew Carwood, Director of Music at St. Paul’s notes, “We welcome thousands of American visitors to St Paul’s every year, and this tour is a way of giving something in return, and enabling a wider audience in the United States to experience for themselves the beauty and wonder of the English Choral Tradition, while remembering those who gave so much in fighting for our freedom.” Other sites on the tour include New York, Atlanta, and New Orleans, where the boys will perform at the World War II Museum.

The concert at Calvary will include works by Mendelssohn, Britten, Fauré, Poulenc, and Rutter, among others.

Calvary Episcopal Church’s mission is “making God’s love visible in downtown Memphis.” Calvary is a parish of The Episcopal Diocese of West Tennessee and The Episcopal Church, a province of the Anglican Communion. Founded in 1832, Calvary today is a vibrant parish that comprises more than 900 baptized members. Although a growing number reside in Downtown Memphis, parishioners come from all across the Mid-South. For more information about Calvary, visit calvarymemphis.org or call 901-525-6602.