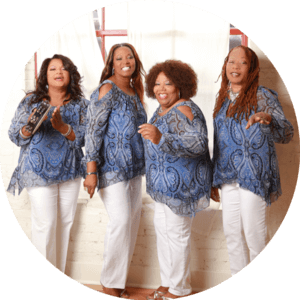 The McCrary Sisters at the Levitt (Overton Park) Shell

“Singing with family means everything,” says Alfreda McCrary. “We’ve been out with the best of the best onstage and in the studio, but there’s nothing like singing harmony with your own flesh and blood.”

The list of artists the McCrary Sisters have collaborated with, both as a group and individually, reads like a stroll through the Rock and Roll Hall of Fame (Bob Dylan, Elvis Presley, Johnny Cash, Stevie Wonder), but with their exhilarating new album, ‘McCrary Sisters: Live,’ it’s clear that the McCrary women shine brightest when they’re center stage. Captured at Music City hotspot 3rd & Lindsley, the album marks the legendary quartet’s first concert release and showcases all of the ecstasy, passion, and heartbreak that have made them some of the most beloved and sought-after singers in Nashville.

A typical McCrary Sisters show overflows with kind of inimitable magic that can only come from sharing your life and love and art with your kin, but the remarkable performances documented here find the sisters hitting new heights of raw power and emotion. It felt like all of Nashville turned out to celebrate the group that night, and the atmosphere on the album is absolutely electric as the sisters feed off of the adoring crowd. The energy in their voices is palpable, as is their sheer joy at being joined onstage by band members old and new along with a slew of special guests, including several of their nieces and daughters.

“We were all of one accord that night,” remembers Regina McCrary. “Everybody’s spirit and mind was set on the same thing, and the atmosphere was perfect. It was just so special to look around and see our girls up there carrying it on for the next generation, too.”

Bridging generations through music is a McCrary family tradition. The sisters—Ann, Regina, Alfreda, and Deborah—were born and raised in Nashville, TN, where they learned to sing at a young age from their father, the Rev. Samuel McCrary. The reverend was an original member of The Fairfield Four, the iconic vocal quartet whose towering influence transcended gospel music and inspired everyone from Sam Cooke to B.B. King. The McCrary household regularly hosted traveling gospel artists including the Staple Singers and Shirley Caeser, but soul, R&B, blues, and country all had a place on their radio, which helped the girls develop into extraordinarily versatile singers.

“Music is music,” says Ann. “When it’s deep down in your soul, it doesn’t make any difference what kind it is. It’s easy for us to pull all those genres together in our songs because we grew up listening to all of them, and they still resonate in our souls.”

Marriage, careers, and family obligations took the girls their separate ways as they grew up, and over the years, they faced more than their fair share of personal tragedy and triumphs, but music always sustained them. Regina may have had the most prominent gig of the bunch, joining Bob Dylan on the road for eight years and singing on three of his albums, but each of the sisters continued to sing in award-winning choirs, on television, in studios, on stages around the world, and, of course, at home for the sheer love of it. Whether it was at Madison Square Garden or in the kitchen cooking supper, it didn’t matter; for the McCrary girls, to sing was to live.

It wasn’t until the early 2000’s, though, that the sisters finally fulfilled their father’s dream and came together to form their own group. The quartet’s chemistry was immediate and undeniable, and Nashville (along with the rest of the world) quickly took notice. The Oxford American raved that the McCrary Sisters “brought a glimpse of heaven to recordings by Buddy Miller, Patty Griffin, Allison Moorer, Mike Farris, and other Americana artists,” while the LA Times hailed “the exuberance in their voices,” and NPR said they demonstrate “the power of living history and the timelessness of family connection.” The sisters took their harmonies everywhere from The White House to PBS, in addition to recording and performing with major stars like Dr. John, The Black Keys, Martina McBride, Eric Church, and more. They joined the house band at the world-famous Ryman Auditorium for the annual Americana Awards ceremonies, where they’ve backed Loretta Lynn and Jackson Browne among others, and released a trio of their own studio albums to critical acclaim. The most recent, 2015’s ‘Let’s Go,’ was a hit on both sides of the pond, with the Associated Press asserting that the album “speaks to the moment while ranking with the most potent roof-raising, pew-shaking music ever created,” and The Guardian praising “their close-harmony vocals [that] switch effortlessly between gospel, soul and foot-stomping R&B.”

That effortless genre hopping is a hallmark of the sisters’ sound, and it’s at the heart of ‘McCrary Sisters: Live.’ On show opener “David Dance,” the band blends Afro-beat horns and Caribbean rhythms underneath the sisters’ spiritual vocals, while “Hum And Moan” is a slow burning, slide guitar blues, and “Stones” calls to mind the avant-funkiness of Prince & The Revolution. The sisters wrote or co-wrote every track on the album save for show-closer “I’ll Take You There,” and despite the varied musical ground they cover, the songs are all inextricably tied together through their optimism and resilience.

“If there’s a song that has a message that’s about loving and supporting and caring and reaching out, I’m in,” says Regina. “Any song that has a message about love and happiness and joy and peace, you’ve got me. That goes not only for the four sisters, but for our whole family. We love singing songs that will inspire and encourage and help motivate people to find their way and get to the light. That’s what this is all about.”

The sisters sing of brighter days to come on “Train” and “Other Side Of The Blues,” assure us that we’re not alone with “He Cares” and “If You Believe,” and offer up a reminder that no burden is too great to bear if you have faith on “Help Me” and “Bible Study.” Perhaps the concert’s most affecting moment arrives with, “Let It Go,” a song which Deborah wrote in the aftermath of a debilitating stroke that nearly ended her days as a performer.

“When I had my stroke,” says Deborah, “I remembered that God does things for a reason. That’s where I was supposed to be, with my sisters by my side. I thank God for my sisters because they’ve helped me in a lot of ways, and that whole experience gave me a deeper understanding of just how much I love being with them.”

That affection extends beyond the stage, too. In 2015, the sisters released their first book, ‘Cooking With Love,’ a collection of stories and recipes passed down from their mother, who was affectionately known in their family as Mudear.

“Our mom used to smile with so much pride to see how happy we were to sit down at the table and eat her food,” says Regina, her voice lighting up at the memory. “Everyone knew what an amazing cook she was. There were lawyers and businesses and hospitals that would ask her to cook big dinners for their banquets and conferences. She’d be in that kitchen for two or three days humming and singing and cooking. The book is most of her recipes, and it’s our way of paying tribute and showing our love to her memory.”

For the McCrary Sisters, showing love is what it’s all about. This album itself is an act of love: love for their family, who joined them on the stage and the audience that night to share in their joy; love for Nashville, which introduced them to a whole wide world of music all in one city; love for their fans, who would so often ask the sisters after concerts for a way to bring home the transcendent night of music they’d just witnessed; and most especially, love for each other. Like any family, the McCrary Sisters have had their ups and downs, but at the end of the day, there’s only one rule.