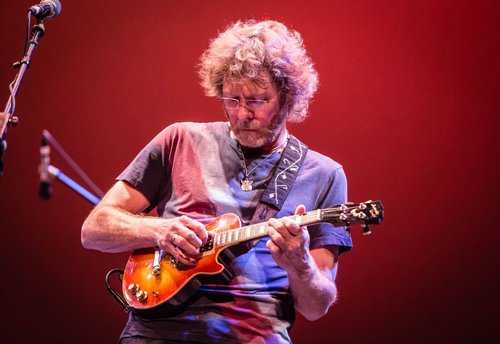 The Sam Bush Band with The Travelin’ McCourys

If joy were a person, he’d bring both peace and frenzy. He’d be full of music, light and energy that soothes even as it stirs us up. Eyes closed, wire-rim glasses in place, mandolin pressed against his ribs, joy would be Sam Bush on a stage.

“I feel fortunate that when it’s time to play, no matter how I feel physically or mentally, once the downbeat starts, my mind goes to a place that’s all music,” says Bush. “The joy of the music comes to me and overtakes me sometimes––I just become part of the music.”

The Father of Newgrass and King of Telluride has long since established himself as roots royalty, revered for both his solo and sideman work, which includes time with Emmylou Harris, Lyle Lovett and Béla Fleck. But instead of kicking back and soaking up honors such as an Americana Music Association Lifetime Achievement Award and a suite of Grammys and International Bluegrass Music Association trophies, Bush still strives relentlessly to create something new.

The McCoury brothers––Ronnie (mandolin) and Rob (banjo)––were born into the bluegrass tradition. Talk about a source abundant and pure: their father, Del, is among the most influential and successful musicians in the history of the genre. Years on the road with Dad in the Del McCoury Band honed their knife-edge chops and encouraged the duo to imagine how traditional bluegrass could cut innovative pathways into 21st century music.

“If you put your mind, your skills and your ability to it, I think you can make just about anything work on bluegrass instruments,” says Ronnie. “That’s a really fun part of this––figuring the new stuff out and surprising the audience.”

Together, the Sam Bush Band and the Travelin’ McCourys will take the stage at GPAC on Thursday, April 18 at 7:30 PM. For tickets and information, visit GPACweb.com or call the Box Office at (901)751-7500.