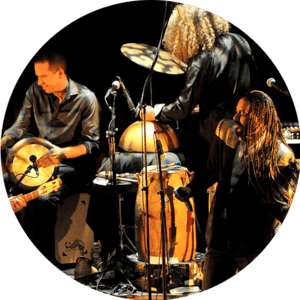 Conceived from vocalist Ravid Kahalani’s vision, Yemen Blues’ original music mixes of Yemen and West Africa influences with contemporary grooves from funk to mambo and the deep soul of old chants. Conjuring up a rich and diverse aural palette with the use of percussion, oud, horns, and strings, Yemen Blues coexists in both the past and present, at once timeless and modern. The collective is a true collaboration of top master musicians, its core including Ravid Kahalani, Itamar Doari, Rony Iwryn, Shanir Blumenkranz and Itamar Borochov.

Yemen Blues was founded by Ravid in 2010, a then rising star in Israel who grew up in a traditional Yemenite family. He learned the language and the traditional chants of his origin, and then extended his influences in the areas of Blues, Funk, Classic Opera singing as well North & West African soul.

He joined forces with internationally renown bass player and composer Omer Avital, and together they created a music vision that attracted media and promoters with their intense showcases. The addition of Israeli-Uruguayan percussionist Rony Iwryn, Israeli

percussionist Itamar Doari, New York trumpeter Itamar Borochov solidified the group’s diverse. In 2012 A known New York bassist and oud player Shanir Blumenkranz joined the band when Omer Avital left the band to focus on his own projects. These days, Yemen Blues more then ever developing their electrifying sound with Ravid’s vision and the phenomenal core of Yemen Blues to a new album and powerful live show.

Yemen Blues’ myriad influences carry over on stage, where the ensemble navigates from the boisterous to the romantic, from joyous celebration to anguished balladry. Horns fire off emphatically,

percussion adds deep rhythmic textures, and the enchanting oud strums out subtle melodies. Frankly, Yemen Blues is one of the most gripping and fun live bands in contemporary music today.

Yemen Blues has toured extensively over the past several years, performing for enraptured audiences across the globe. Top musicians from around the world are taking notice as well.