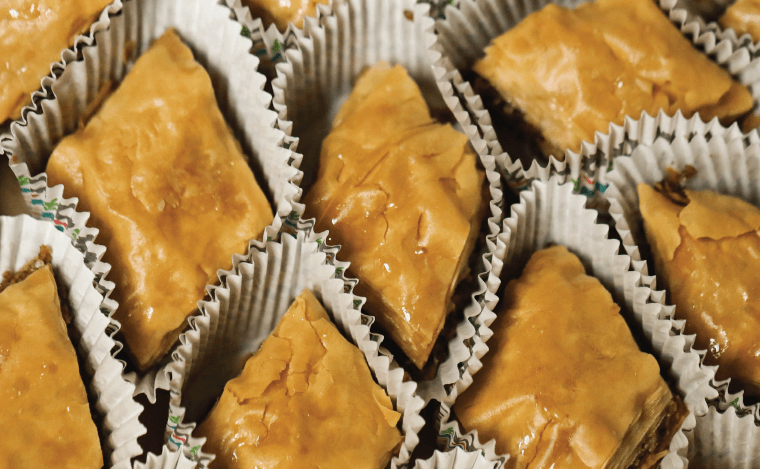 In the Kitchen with Jenny Kish

A Taste of the Middle East

Jenny Kish loves to cook for her family and friends. Her kitchen is centrally located in her home and features a large island for cooking. One of her specialties to make is Baklava, a Middle-Eastern dessert made of phyllo pastry filled with chopped nuts.

Jenny grew up in Beirut, Lebanon, and her husband Sarkis grew up in Damascus, Syria. They met in Montreal, Canada, and later moved to Memphis where they raised their two children - Mary Anne and Sarko. Mary Anne lives in Little Rock, Arkansas, with her husband and two children, and Sarko lives in Memphis and runs the family business Sarkis Kish Oriental Rugs. Sarkis has retired from the business but still consults and works with his son Sarko on a regular basis. Her children, grandchildren, and friends love all of her cooking, but Baklava is one of their favorites!

Jenny says her mother-in-law taught her the Baklava recipe, and Jenny makes it for the holidays, her bridge playing group, family, and dinner parties. “Instead of bringing a bottle of wine to dinner parties we are invited to, I take a big tray of Baklava,” Jenny says. She and Sarkis have supported many charities over the years, including Boys & Girls Clubs of Greater Memphis, The Orpheum Theatre and its auctions, The Buckman Performing Arts Center at St. Mary’s School, The Dixon, and Opera Memphis to name a few. “In the past, I gave a dinner party at my home as an auction item because I like to help as much as I can. At a recent Boys & Girls Clubs auction, a dinner party I donated to host at my house went for $2,000,” Jenny says. We bet guests were treated to Jenny’s delicious and famous Baklava! 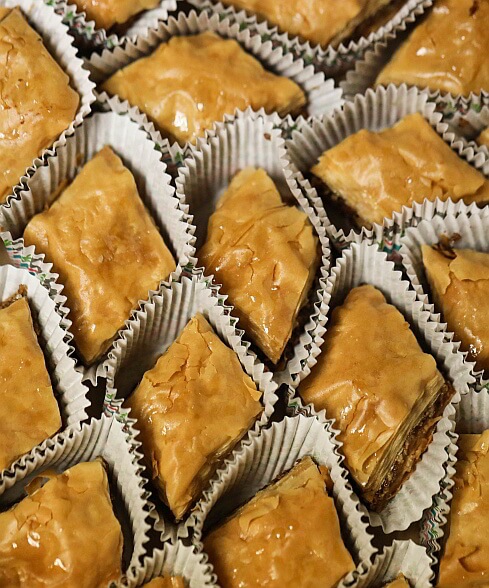 2 cups pecans, finely chopped
1 cup pecans, coarsely chopped
2 tablespoons sugar
½ teaspoon cinnamon
Dash of clove
4 sticks of unsalted butter
Phyllo dough
Mix the pecans, sugar, cinnamon and clove in a small bowl. Melt 4 sticks of unsalted butter and spread over the bottom of a pan. Next, layer the phyllo dough, letting it hang over the side of the pan, then brush butter on the top layer of the phyllo (butter the phyllo as you are layering it). After several layers of phyllo dough brushed with melted butter spread the pecan mixture over the phyllo. Next, layer the phyllo and brush with melted butter. Once finished, cut into angled pieces. Pour sugar topping* over the top and bake at 350 degrees for about 45 minutes.

Jenny says this is best to make a day ahead and leave out at room temperature.
1 ¼ cup sugar
1 cup water
1 stick of cinnamon
2-3 cloves
Add all the ingredients to a small pot and cook over medium heat. Stir at the beginning and at first boil put in 2-3 drops of lemon (so the sugar does not harden). Let it boil for about
15 - 20 minutes, and cook over medium heat for 30 minutes. If you overcook it, you won’t be able to pour it over the Baklava. Jenny says she makes the Baklava the “morning of”, or at least lets it cool a few hours before serving or taking somewhere.