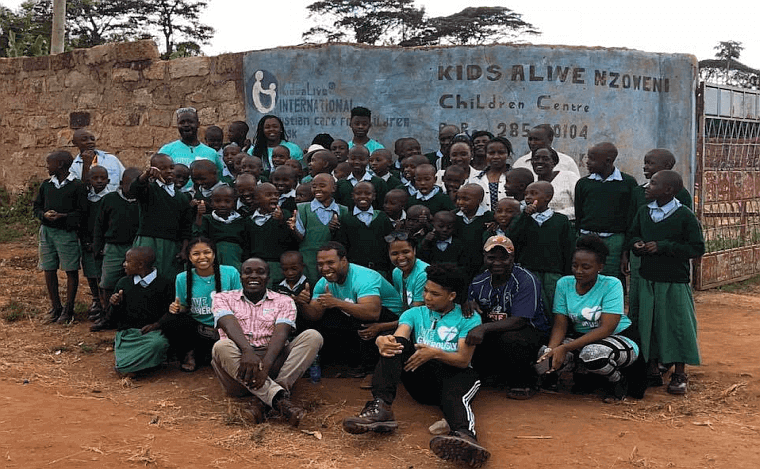 This summer I had the amazing opportunity to visit Nairobi, Kenya on missions with my family and close friends. In a country with HIV/AIDS, many children are placed in orphanages with few re-sources. I am so grateful to have been introduced to a vast array of beautiful cultures and interesting personalities. I found Kenya to be full of opportunity and possibilities. We met so many beautiful peo-ple who truly care about bettering their communities and spreading joy in the lives of children. One of the people we met is named Ben-son Manyunyu Barthel, a self taught professional photographer and the creator of “put a smile on a child’s face.” Barthel works alongside his mother, Pascaliah Nduku, with 122 children at the Inua Mimi Rescue Center in Kibera which is one of the largest slums in world. Additionally, I had the pleasure of meeting Alex Gudah, a famous “hype-man” in the city and Oscar “the Juggler,” the #1 freestyle football (soccer) player in Kenya. He encourages kids to pursue their God-given talents despite their circumstances. Kid's Alive Children's Home in Mitaboni, Kenya was our first destination, Upon arrival, we were greeted with large smiles and a warm meal consisting of classic Kenyan delicacies such as traditional stew and chapati. I was initially surprised by the abundance of fresh produce included with our meal. Immediately following our dinner, we were given a tour of the rooms and found that the fresh pro-duce was grown by the children with help from the children’s home the orphanage, and rows of peppers, tomatoes, watermelon, and a rooms to house the children and very little personal belongings for each child. Each room held around twelve kids and each of their “closets” consisted of small cubbies containing a few toothbrushes, shoes, and a change of clothes.
Before we left we played with toys and donations we brought, and prayed for each child. I am so grateful to have had the chance to visit them and will be forever changed by this experience.
Oscar the Juggler was raised for more than ten years of his life. We were immediately greeted with open arms of genuine love and affection upon our arrival. Young girls with bright smiles introduced themselves and shook my hand happily. After our introduction we seated and gifted with a prepared showcase of their amazing talents. They sang, danced and even tumbled like I had never seen. From the circus-like stunt acts which had me on the edge of my seat to a beautiful self constructed choir that moved me to in awe of the surplus of joy and talent within the orphanage of two hundred children. Later, our friend Oscar the Juggler performed a few freestyle tricks, Hype Gudah brought the children to their feet with enthusiasm, and Wayne Weaver, our family friend, gave an inspiring speech for the children to never give up on their dreams and always give God the glory no matter the circumstance. We also had the opportunity to showcase some of our talents as well. We taught them a few American dance moves and watched them fall in love with the Memphis “Shoot” dance. We ended the night by giving them a donation of food and supplies and then formed a line to touch and pray for each child in the home.
Prior to our departure for Kenya we discussed visiting Kibera. Our discussions involved both schools of thought on visiting the slums of the world: “was it okay to walk through the slums and view object poverty and then return to our homes where we lack very little?” Initially, were very torn on the decision to go and also were was much to our surprise when Gudah and Oscar announced that town and introduce us to their friends that still reside in Kibera. We walked the streets of slums and had the opportunity to first-handed my experience the lack of resources. Most people do not have running water or electricity, and trash is burned on the street. However, we also found craftsmen, artists, shop owners, philanthropists, filmmakers, photographers and so many more positive, developed aspects of the area . At the end of our tour, we saw hundreds of children with cameras learning the art of photography at the Inua Mimi rescue center. It was a beautiful close to a week of experiences that I will never forget. I am forever grateful for the opportunity to experience the differences in how people live around the world and thankful to have seen that one can find joy in any circumstance.

Share My First Mission Trip to Kenya from 4Memphis Impact