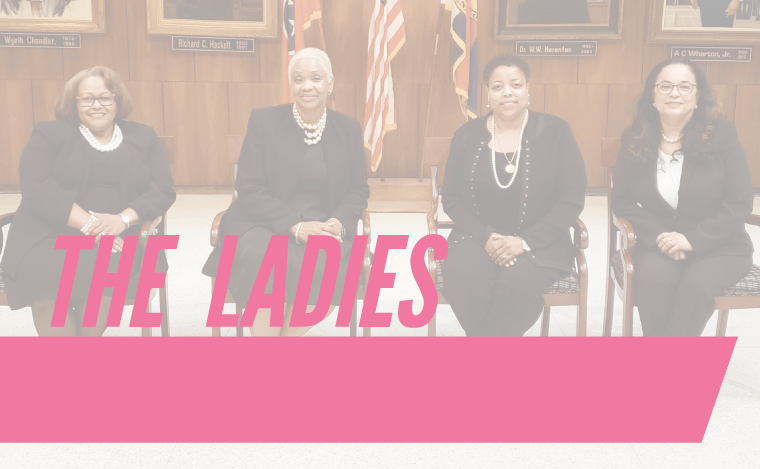 Happy 200th Birthday to our city! Founded on May 22, 1819, by three men - John Overton, James Winchester and Andrew Jackson - Memphis was named for the ancient Egyptian city, meaning “Place of Good Abode.”
Today, we are the 25th-largest city in the United States in terms of population. Our city’s incredible development is reflected in the progression of women in elected leadership. Just as the United States Congress has the most diverse membership in its history, Memphis is reflecting that trend. This year the Memphis City Council reached an historic milestone with the largest number of African American women serving on the Memphis City Council….It certainly is an exciting time for Memphis.
I had the pleasure of sitting down with the ladies of the Memphis City Council, and just as 4Memphis magazine “highlights the positive of our city”, these women are working together to make Memphis its best. Council’s Vice Chair Patrice Robinson represents District 3; Jamita Swearengen represents District 4; Gerre Currie represents District 6; and Cheyenne Johnson represents Super District 8-2. While each councilwoman represents the city and individual parts and neighborhoods of the city, one thing is for sure - they all come together on Council Tuesdays to work together!
“It is exciting to be a part of the transformation that is going on in the city. We are seeing transformation on city council in having four elected women, and our different perspectives getting men to see things in a different light. We offer different strengths to the table.” Gerre says. Gerre adds that her background provides a different perspective as it relates to business decisions in the city, and how low-moderate income and how they are impacted. “I’ve had the opportunity to work on high end, and lower end, and when you have both of those perspectives you try to figure out how to build the city but not let anyone feel left out,” Gerre says. She would like to see more economic parity in communities that feel like they have been left behind.
Patrice says she loves to serve. Patrice served on the Memphis City School Board and Shelby County School Boards for 13 years, and she brings her experience and passion to serve, and Patrice is methodical in her thinking. “I am excited to live in Memphis. This is the greatest place to raise your children. We have great food, lovely trees, a top-of-the-line medical center, and southern hospitality, and we have Graceland! Graceland is in my district, and it is the second most visited house in the country,” Patrice says. “Graceland brings thousands of tourists from all over the world...they are spending their dollars here in our community. It is a great anchor for the city of Memphis.” “As Graceland expands, I hope the city invests more on Elvis Presley Boulevard so that when guests come from all over the world they have a greater opportunity to taste Memphis, see Memphis, and experience Memphis in a different way,” Patrice says.
Jamita enjoys being responsive, responsible and accessible to her constituents. “I enjoy going to neighborhood associations, meeting the children, individuals, and the ministers of the community. I am a life-long member of Mt. Pisgah CME Church where I am a minister of music...I was born and raised in my district - and I still live here today!” Jamita says. She hopes that Memphis continues to expand and increase minority and women contracts in businesses, and when we bring businesses to the city we keep them here. “I am looking forward to the expansion of the Fairgrounds. I’d like to see more businesses come into the city and in order to do that we need to curtail crime and increase the number of police officers in the streets.,” Jamita says.Cheyenne has served in local government for about 25 years, which brings leadership and structure. “I think Memphis is going through a lot of change - we are seeing progress. The economy is picking up, and I am looking forward to advancement - not just in the downtown areas, but in all the other areas such as Whitehaven, Hickory Hill, Westwood and the smaller areas of Memphis,” Cheyenne says. She says her favorite thing about Memphis is the people. “I think the people are an adjusting group of individuals. They don’t like change, but they accept it,” Cheyenne says. 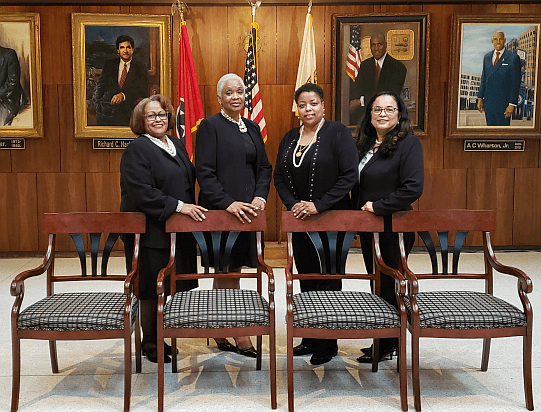 Patrice says, “When I travel and people ask me ‘When should I visit Memphis?’ I always tell people to come visit during Memphis In May - it is a beautiful time of year and they can really enjoy it.” May is here, and the ladies are all looking forward to enjoying Memphis In May festivities, especially the barbecue, music, and downtown - things Memphis is internationally known for and offers to the world!

Share The Ladies of the Memphis City Council-2019 from 4Memphis!