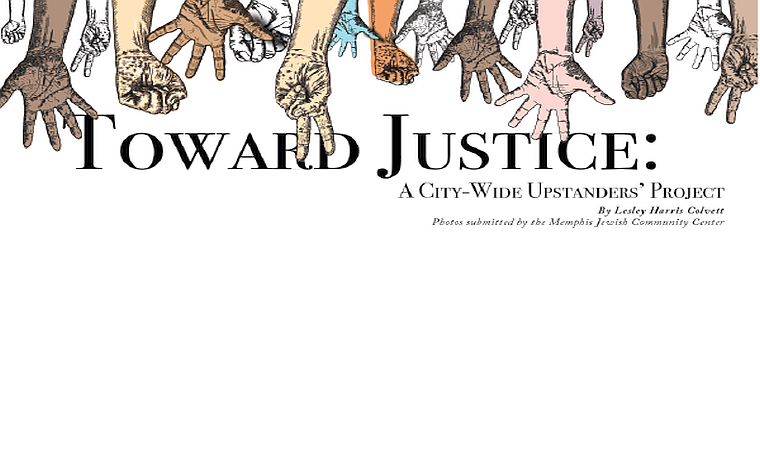 An inaugural event will be held in Memphis, May 1-31, and while it is a month-long event, the impression will last a lifetime. “Toward Justice: A City-Wide Upstanders’ Project,” presented by the Memphis Jewish Community Center (MJCC), is a free event open to the community that will be held at the MJCC and is the first of its kind.

Toward Justice: A City-Wide Upstanders’ Project is the brainchild of Marcy Stagner, M.A. Ed. and Program Director of Cultural Arts and Adult Services, Memphis Jewish Community Center, and is an idea she has had for a while. When Marcy presented the concept a year-and-a-half ago to some of her co-workers and MJCC staff, they were very supportive and encouraged her to run with it. “We are all so over exposed to narratives that are very negative, and we want to change the direction of the narrative by exposing the organizations and people who are making the world a better place; change the narrative to a more positive one, while at the same time, doing the challenging work of recognizing where good is lacking so we can make progress as we move forward,” Marcy says.

The month-long festivities will kick off May 2 with Keynote Speaker Bob Zellner, who is one of the most influential leaders in the civil rights movement, from the 1960s to today.The son and grandson of Ku Klux Klan members, he risked his life in the fight to achieve The Second Emancipation. Bob worked alongside Martin Luther King, Jr., John Lewis,Rosa Parks, and many other civil rights leaders.

The Carl E. Moore exhibit will be on display all month, with an opening reception held the evening of May 3. “The work I’ve created over the last few years has dealt with identity and color. During this process, my goal was to compare social ideologies about race, stereotypes, and belief systems to everyday color and the perception of these colors in our environment,” the artist states.

BESA: The promise film screening will be held May 15 at 7 pm and is the never-before-told story of Albania - a small European country that opened its borders to shelter Jewish refugees, even as it endured a brutal Nazi occupation.
“Barrier Free” is a socially-engaged art installation created by Memphis-based artist Yancy Villa-Calvo about the impact of barriers. Through multimedia work, she seeks to create awareness, provoke a thought, and engage into conversation on issues of social justice and equality. Her work is displayed in private collections in the U.S., Mexico, Netherlands, Brazil, and Israel.

The “I Am Your Protector” Exhibit is a powerful storytelling and photography exhibit that will be displayed May 1 - 31 to share diverse stories of people who have been “protectors” of someone who may be different from others, and who stand up and speak up for each other across religion, gender, sexual orientation, beliefs, and any lines of perceived divide. “We want to show people the positive, and this exhibit will feature their photo and story on how they are making Memphis a better place,” Marcy says.

Marcy says that she thinks of it like a puzzle, and all of these elements are pieces of the puzzle. She hopes this creates a new narrative - one that exposes us to a constructive and unifying message and shifts the tide of dialogue to one of hope, reverence, and the honoring of shared experiences. For more information about Toward Justice, visit jccmemphis.org/justice.