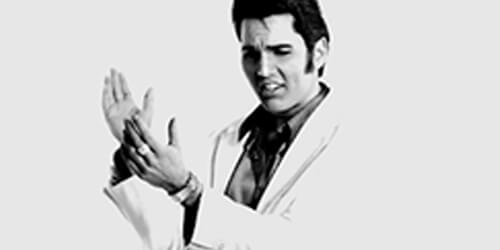 The show will also feature David Fontana, son of Elvis’ drummer DJ Fontana, as part of a period-appropriate four-piece band that will bring fans back to the beginning of Elvis Presley’s career.

Cody Ray Slaughter tells the tale of Elvis’ ascension from local Hillbilly Cat to the King of Rock ‘n’ Roll in the many stages of Elvis’ career, when hits like “Don’t Be Cruel” and “Heartbreak Hotel” set Elvis on the road to becoming an international phenomenon.

The spirit of the King lives on. Outstanding Elvis Tribute Artists will capture the essence of Elvis Presley while paying tribute and upholding the legacy of his music during five shows Aug. 10-14 at the Halloran Centre. All shows will be backed by a live band.

VIP packages that include tickets to all five shows are available at a discounted $225. See the full lineup of shows here.