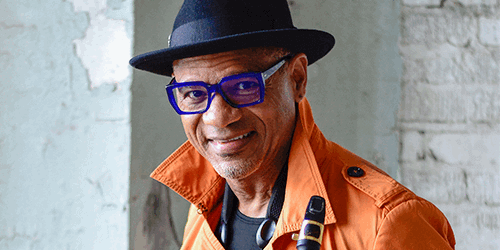 Memphian and Grammy-winning saxophonist Kirk Whalum will be honored with a note on the Beale Street Brass Note Walk of Fame at the Halloran Centre. The ceremony will be followed by a lunchtime mini-concert on the Halloran Centre plaza.

Surrounded by music from an early age — in his father’s church, around his piano teacher grandmother, seeing his uncle Hugh “Peanuts” Whalum on a home stop from his jazz touring — Whalum found his calling. Over the past three decades, his saxophone skills have been sought after in studios, on tour, in clubs, in concert halls, and across continents. His versatility with the instrument defies genre. He has worked with artists ranging from Barbra Streisand to Babyface, Al Jarreau to Quincy Jones, and Whitney Houston, with whom he toured for seven years. Whalum appears on over 200 albums and 30 of his own solo recordings, including his Gospel According to Jazz series. He is a Grammy winner for Best Gospel Song in 2011.

Whalum is also an ordained minister with a Master of Arts in Religion from Memphis Theological Seminary. He produces the Bible in Your Ear podcast. He served as unofficial chaplain for the Whitney Houston tours.

Currently, he is in heavy touring with dates across North America, Europe, and Africa. His next big project, a jazz series called Kafé Kirk, will debut at the Halloran Centre on Oct. 7 with special guest artist New York-based Lindsey Webster.

About the Brass Note

The Beale Street Brass Note Walk of Fame program was created in 1986 to tie the historic musical traditions of the old Beale to the newly renovated entertainment district. Approximately 10 notes per year are awarded and the total on the sidewalk is at 170. The notes honor musicians, studio engineers, composers, radio personalities, promoters, and others who have made significant contributions to Memphis area music.