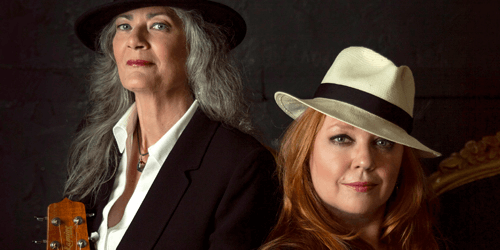 Reba Russell and Susan Marshall have joined forces to create a special eclectic soul-filled evening of powerful song. These women are two of the most accomplished and celebrated singers in the Mid-South. Both have garnered national and international acclaim during careers that span over thirty years.

After performing together for decades, doing live shows, concerts and festivals, these two women’s voices combine in a manner that is both powerful and nuanced and is a wonder to behold. Susan and Reba have performed with or sung background vocals for many well-known artists including, most recently, Al Green and Foy Vance.

Madjack Records artist Susan Marshall has appeared on Austin City Limits, The Late Show with David Letterman, Late Night with Conan O’Brien, and the BBC’s Later with Jools Holland. Her studio background vocal work has garnered multiple gold and platinum record awards as well as the distinction of having sung background vocals on five Grammy-nominated recordings.

Reba Russell is a name synonymous with the Memphis Music scene. Beginning early in the 1980’s (with band’s Visions, Portrait, and Reba and the Portables) and now currently fronting the Reba Russell Band, Reba has covered most bases in the music industry including touring throughout the United States and Europe and releasing eight albums independently.

In 2011, Reba was nominated for the “Koko Taylor Vocal Award” by the Blues Foundation during their annual Blues Music Awards Show in Memphis and more recently, in November of 2018, she was honored with a Beale Street Brass Note.